Hello again. Well, seems llike someone found a bug in Ib that prevents him to pick one of the pieces of the guertena painting, more specificly this one: 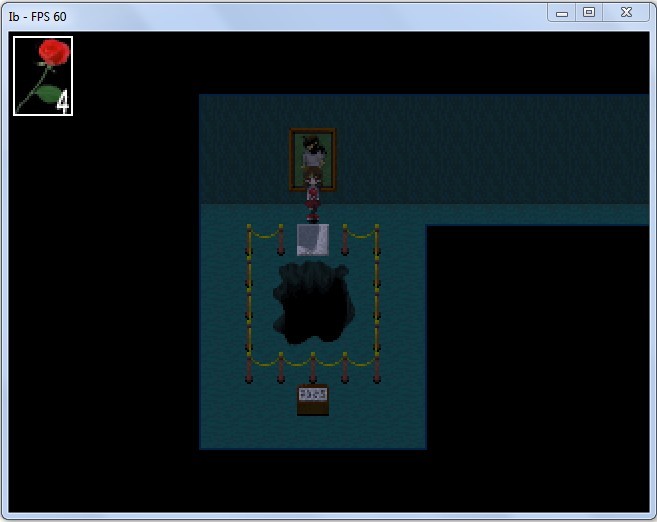 Thank you Mr. Faq for the find and details about the regression. Could you upload the savegame somewhere? It would help a lot. I’m playing this game but I’ve not reached this point yet.

Now two things. One, this is an original RM2k save, I’m replaying the game with easyrpg to see if the reason of it was indeed due to the swap between RM2k and EasyRPG or not. Second, the point where Ib appears is a little far from the place shown since you can’t save closer (there is a closer save point, but it’s still far from it). In order to reach the place where this piece is, go to the right and then up towards the other map. You’ll reach a big place with pretty much paths. There, search for the stairs that are around the upper-right zone of the map. Go through there, then follow the way and you’ll end in the place shown in the screenshot

Edit: It’s not the reason, the problem is still there. The only thing that changes is the fact that transitions between maps are shown properly (fade out, fade in), while if you use an RM2k save the screen only fades out.

Hello. I’ve found this same bug today. Here is my savefile, just in case you might need it: mega.nz/#!sxF0RITK!0mn9zA_u3V5u … l0A6OyNsz4

Now, I used another emulator to pick up the piece and save the game. Even though I didn’t do anything else than picking up the item (didn’t get into a new map or anything), after moving the new data back to the EasyRPG folder, this is what happens when I try to load the file I saved with this other program: 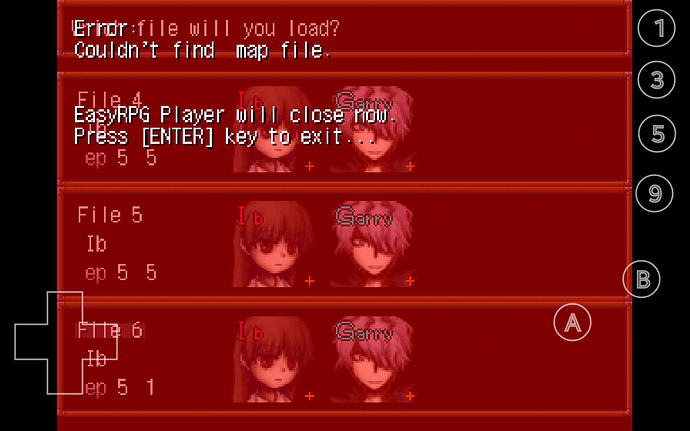 Sorry if this is not relevant and I’m just being and idiot.

[quote=“Mr.Faq2014”]Here: mega.nz/#!aFpzwKqY!2tGt9rgPvynJ … QCsJuFrxEw
Edit: It’s not the reason, the problem is still there. The only thing that changes is the fact that transitions between maps are shown properly (fade out, fade in), while if you use an RM2k save the screen only fades out.[/quote]

Thanks for the bug report. RPG_RT and EasyRPG use the same savegame format. It’s still not 100% compatible but at least direction RPG_RT -> EasyRPG works with minor side effects (the other direction usually crashes…). The worst thing that can go wrong is that events on the current map are not correctly loaded but after changing the map everything should be fine.

The transition is a bug in our savegame loading code then, thanks for reporting.

[quote=“Juunigatsu”]Hello. I’ve found this same bug today. Here is my savefile, just in case you might need it: mega.nz/#!sxF0RITK!0mn9zA_u3V5u … l0A6OyNsz4
[/quote]

This LSD file crashes our parser. The other emulator you used writes incorrect files (at least for Player).

We will investigate this issue in IB and try to provide a fix soon.

The reason was found and will be fixed soon. The problem was that there were 2 events: On below IB and one at this item. And the interpreter only executed the below event and not both.

Cool, I’ll stay tuned. In the meantime, I have a suggestion, but I’ll put it in another thread.

The bug is fixed now in the latest continious build and we pushed it in the Android store. We will announce an official release later, enjoy.