My RM2k3 game on web : How skip the title screen?

Hi !
I am actually trying to host my RM2003 game on web.
Here is the link : https://brikoumaker.github.io/LAQUESTION/La%20Question/ 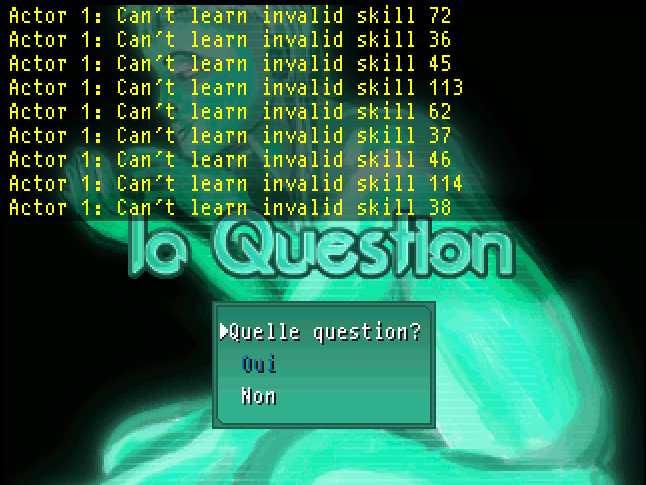 Hello Brikou, thanks for your question (and nice game).

About warnings, it seems you are trying the git version of liblcf and Player, which added multiple sanity checks. In case these skill IDs in your database skills tab are probably invalid because the database had some skills and later removed but the actor still has references to them (otherwise there is a bug), a workaround to “silence” them is by removing (if possible) these references to skills able to be learnt in the database editor. This is however a possible easy fix from our part.

On the lag issue, the current web Player implementation loads assets on the fly (using asynchoronous XMLHttpRequest), this was intended to load the game as fast as possible, but indeed this makes the game wait for some assets and display pictures or play music later than expected or desired. A possible workaround is edit the game and preload files by loading images off-screen and music and effects which are important to be on sync and stop them immediately. This might be improved in the future, but needs improvements to the liblcf library first. It is recommended to preload just the really new files needed each map and just for critical ones to make gamers get a better experience without waiting too much. Assets get cached by the browser, so this is needed just once for the whole game.

Concerning the skipping title scene feature, EasyRPG Player has in the roadmap adding AEP (Auto-Enter Patch) support, but in the meanwhile you may add the parameter new-game to the URL. Demonstration: https://brikoumaker.github.io/LAQUESTION/La%20Question/?new-game

Update: I’ve seen certain lag while loading sounds (maybe due to libsndfile), I’d recommend to convert them to Vorbis format because they are a lot smaller (and maybe Opus, but not sure if current web Player has Opus format support enabled).

Since you are using 2003 version, you can uncheck this checkbox to disable the title screen: 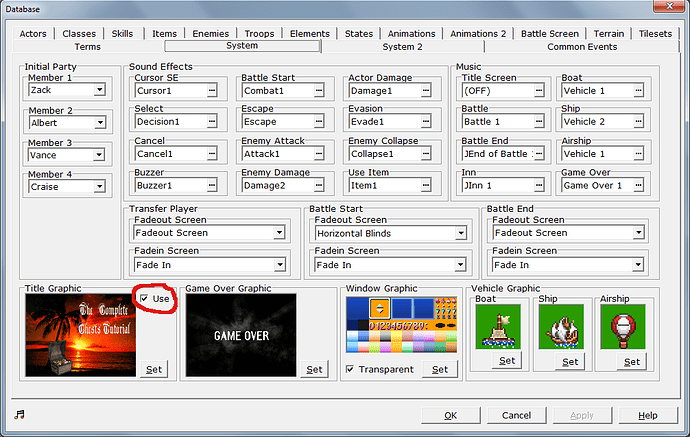 Thanks for the anwsers !

@fdelapena :
For skills issue, I created empty skills slots in the database and now I have no more warnings.

I converted all my sounds as ogg vorbis and now my audio files are a lot smaller. But my version of RM2003 editor can not import vorbis files, so my musics and sounds are not played. (However, without any sound, there is no more lag in the game !)
I tried to rename my audio files like that “music.ogg.mp3” and now I can select its in RM but when I launch the game :

The new-game parameter works ! Thanks !

@carstene1ns
For me, the Title screen is skipped just with RPG_RT but not with the easyRPG players. But the parameter in url works !

EDIT : I remade the index.json and now the ogg sounds are played ! But there is always a lot of lag when a sound is loaded. It takes one second to play a sound but my entire sound folder is only 3 Mo.

I have downloaded the game and inspected the Database.

The flag is not set. So if RPG_RT does not display the title you have an additional patch applied.
Remove that and use the checkbox (available since RPG Maker 2003 v1.11).

RPG_RT display the title, but not the easyRPG players. I have differents patchs applied and it is a little messy.

However, I finally succedded to make a satisfying browser version for my game : https://brikoumaker.github.io/LAQUESTION/La%20Question/?new-game

For the sound lag, I finded a solution came from the hell : I captured the audio of my introduction cut-scene with audacity, I deleted all the sound effects and now all the sounds of the scene are just one BGM. But there can be some delay.
There are always some little graphic and sound bugs and lags, but it is not too uncomfortable for the player.

The sound lag is a problem with Firefox. In Chrome and Edge the delay is still not great but much better.