Default behaviour for missing Monster graphics should be simply to display nothing instead of a placeholder image. This seems to be a rare occurence where the RPG_RT exe won’t crash when missing a file.

The placeholder graphics are an issue in the final battle in Unterwegs in Düsterburg. The way Grandy implemented this battle is by referring to several placeholder graphics which he than deleted from his resource folder instead of just creating a completely transparent file. (Left Hand, Right Hand, Main Part of the boss…) The visuals of the boss are part of the backdrop image.
In RPG_RT nothing is drawn when a monster graphic is missing. 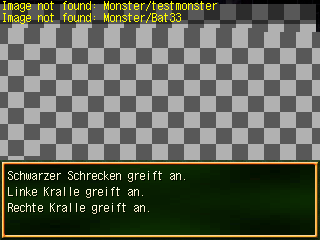