I’ve tried playing a simple Polish game «Reis Adventure». It’s not really playable because of vehicles, but it has a strange bug: I get a great lot of such messages:

i[/i] seems to be a Polish translation of i[/i]. It seems, the message appears any time when a menu item is pressed, or any other action that has no SFX is done, and when no BGM is played.

Hi Jikmok, is this game working fine even with a different RPG_RT.exe? e.g. copied from an English game. And yes, looks like the used editor got overtranslated and screwed this reserved string. A workaround to handle this would be easy to be included if needed.

Hi Jikmok, is this game working fine even with a different RPG_RT.exe? e.g. copied from an English game.

Here’s how it looks in the editor: 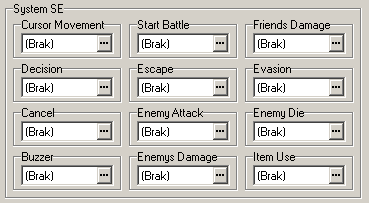 This “works” in Don’s RPG_RT because it just ignores missing audio files.

A really idiotic idea… translating (OFF) with (Brak)

a workaround for this may be skip warning output if soundfile starts with ( and ends with ) to avoid the noise in the warning output. BTW Ghabry, warning console can be disabled with F5 (or souch) as discussed long ago?

It’s better to support (Brak) as it is more probable to exist games with filenames with parentheses. I’ve opened an issue at github.com/EasyRPG/Player/issues/374

Jikmok can you test this?

Yes, Gazille, this bug is fixed in your branch. Thanks!

By the way, I’ve found the translation that replaced i[/i] with i[/i]. It is RPG Maker 2000 translated by Jargo (RPG Maker PL 2.0), available here: rpgmaker.pl/?co=download&typ=programy

The (Brak) bug only affects RPG Maker 2000. The Polish translation of RPG Maker 2003 (RPG Tsukuru ME) leaves ‘(OFF)’ untranslated. But it has another problem: its own set of RTP additions — I’ll document these later… I wonder if anyone ever uses them…

Hi Jikmok, i have been researching for this and reached an important conclusion for emulation:

Using english RM2003 translation, if i have a sour or music file called (OFF).wav or (OFF).mp3 they are not player neighter on editor or on the Game itself.
By the other hand, if i use a sound/music file named (Brak).wav or (Brak).mp3 it’s played in both, Game and Editor.

Can you do the same test to see if (OFF)/(Brak) files are played on Polish editor translation?

I can’t check this since my Wine doesn’t play any sound, and I don’t know how to get it to.

Feel free to download Reis Adventure or a translated version of RM2k, add a (Brak) sound and check yourself.