Currently playing the new version of VD on easyrpg. So far everything is going pretty well.
Just found a little bug, where in battle the sprites get flashed with their borders/transparency, I think it happend with some charset too: 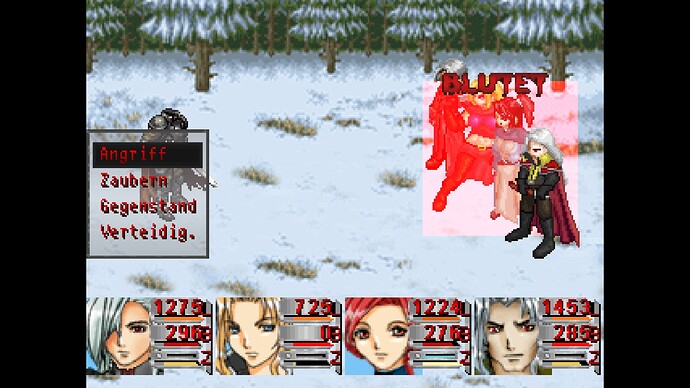 I’ll most more bugs, if I find some.

We are already aware of this particular issue: https://github.com/EasyRPG/Player/issues/1225

Found something else, which is probably due to easyrpg.

When I use an item with multiple targets, there are as many units consumed as there are targets.
So if I’m using an item that heals all 4 party members, then 4 units are being consumed.

edit: Not so sure about this anymore. I’ve also had the case that I used an item on a single enemy and lost like 3 units of it or so. So it’s possibly not necessarily because of multi target.

thinking about it, it is probably due to items that have a multi target, but there do not need to be multiple targets around to consume more than 1 unit… ^^

There seems to be a big issue on resistances for status effects and elements.
Items that are supposed to prevent a status like “Brennend” or be resistent against an element like fire, simply do not seem to work, although the arrangements in the database seem to be right.

So I guess this is a problem of easyrpg and needs to be looked up urgently, since it is complicating a great part of the battle gameplay,

The colored boxes and the multiple item consumption are fixed in an upcoming huge battle patch.

The other one is noted, thanks.