Talking about the PSVITA port (Rejuvenate) i mentioned here: Working on a 3DS Port
Is it possible for the libs currently used by easyrpg to not use stdio for files? (Since it appears a wrapper for that functions is not available in vitasdk).
If this is a bypassable issue, adapting the 3DS port to work on PSVITA it’s quite easy (at least for the graphics part) and could be worth the effort maybe.

Replacing stdio functions is currently just not possible without lots of afford because the whole Codebase uses FILE* and std::fstream. Also the libs we use require stdio and would need a rewrite.

What does the current port lack?

I think the SDL port should be easier to finish so.

So where should i found source codes for both versions? (Also are there somewhere portlibs already compiled with pspsdk?)

Sorry. @carstene1ns made some good progress already. It needed modifications to the psptoolchain because the latest one generates bad code. I assume he publishes all of it when he finds time to clean it up

There are some audio issues with FmMidi (eats too much CPU time on the single core PSP, solution is being worked on) but the rest works.

Yeah, there are some issues yet, however basic gameplay works.

The controls are actually not so sluggish like they seem, this is me looking through the phone while recording, increasing the input lag.^^’

I’m going to re-propose this now that PSVITA has a fully native homebrew loader (HENkaku). If you can let me have a precompiled toolchain for vitasdk, i can try to port at least the rendering code (sound will come later).

Could you check if the psvita SDK contains a normal toolchain consisting of a arm-whatever-gcc (or clang) compiler? In that case cross-compiling is not that much work depending on how broken the system headers are.

And because newlib exists I assume stdio and fstream will work?

As for stdio, yes it works (the only broken things are POSIX syscalls like open, write, etc that can be easily replaced with a couple of define since there are equivalents in vitasdk using native Vita API.)

Okay then this should be almost straight-forward. Only problem I see is that we probably need to update the “config.guess” of all libs because they don’t know what “arm-vita-gcc” is.

We avoid POSIX in most parts because it’s incompatible to Windows.

Started working on it today. Where can i contact you for troubleshooting? Do EasyRPG team have an official IRC channel?

Answer comes late but for anybody else: #easyrpg @ freenode 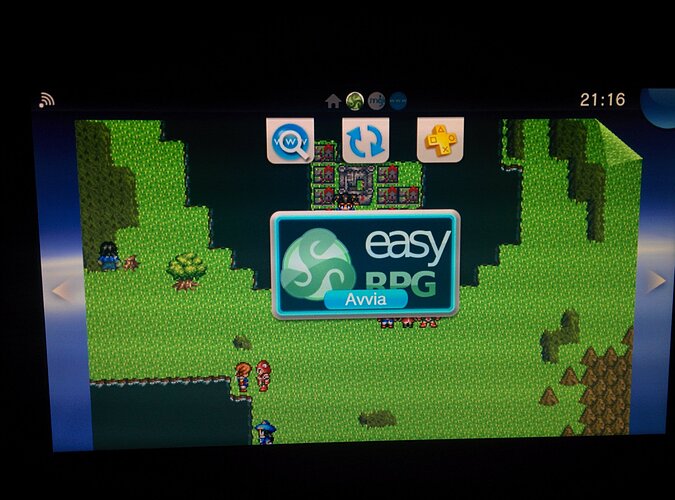 First test release will probably come tomorrow or in a couple of hours! @EasyRPG

Any chance you could post binaries, even if they’re not 100% perfect? I’m desperate to play some RM2K on my PSP. Even just a little bit.